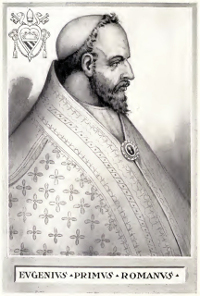 Eugene I was a Roman priest who had held various positions in the Church and was known for his charity and his sanctity. He was consecrated Pope on August 10, 654, while his predecessor, Pope St. Martin I, was still alive (he died on September 6), an exile and prisoner in the Crimea by order of Monothelite Emperor Constans II. Martin is reported to have approved the election, but many believed Eugene was a puppet of Constans. Eugene soon asserted his independence by refusing the Emperor's demands that he acknowledge Peter as Patriarch of Constantinople and allow toleration of the Monothelites. Constans was furious, and only the capture of Rhodes by the Moslems in 654 and their defeat of Constans at the naval battle of Phoenix in 655 saved Eugene from sharing the fate of his predecessor. Eugene died in Rome on June 2. His feast day is June 2nd.