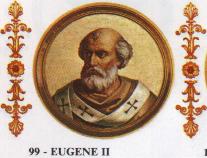 Eugene II An archpriest at the time of his election to the throne of St. Peter in 824, Eugene dutifully informed the King of the Franks that he had been elected and that he, as pope, acknowledged the king's sovereignty. King Lothair came to Rome that year and passed a constitution that allowed lay people again to participate in the election of the pope. A synod two years later approved the law. Eugene refused to yield to Louis I's iconoclasm and commended the missionary work of St. Ansgan in Denmark. Eugene died in 827.