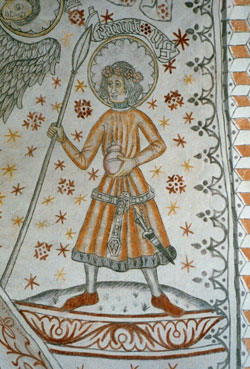 St. Canute Lavard, not to be confused with Canute IV of Denmark, was a Danish prince born on March 12, 1096, as the only legitimate son of King Eric I of Denmark. Growing up, Canute was in close contact with the noble family of Hvide.

In 1115, at 19-years-old, St. Canute Lavard was placed in charge of the Duchy of Schleswig by his uncle, King Niels of Denmark. During the next 15 years, Canute successfully established peace in the border area. He spent years of his life defending his area against Viking raids and supporting the missionary work of St. Vicelin. He did so well, he was given the title Duke of Holstein and became a land holder of the Holy Roman Empire.

St. Canute Lavard was the first member of the Danish royal family to be attracted by knightly ideals and medieval German habits. Canute went on to change his title to Duke of Schleswig.

Though his appearance made him very popular and listed as a possible successor of his uncle, Canute had several great enemies among other Danish princes and wealthy persons. They questioned his loyalty to the country and feared his bond with Emperor Lothair II, whom Canute tried to evangelize.

Caunute's uncle, Niels, and cousin, Magnus the Strong, were alarmed by Canute's recognition as King of the Western Wends by the emperor. This fear led Magnus and Canute's other cousin, Henry Skadelaar, to murder Canute on January 7, 1131, as he was trapped in the Haraldsted Forest near Ringsted in Zealand.

St. Canute Lavard's initial resting place was in the Ringsted Abbey, one of the earliest Benedictine houses in Denmark, but in 1157, his remains were transferred to St. Bendt's Church, a new chapel in Ringsted. His death provoked a civil war that lasted until 1157, and ended with the triumph of Canute's own son, Valdemar I.

Canute was canonized by Pope Alexander III in 1169, at the request of King Valdemar. He is often depicted as a knight with a wreath, lance and ciborium. St. Canute Lavard is the patron saint of Zealand and Denmark, and his feast day is celebrated on January 7.