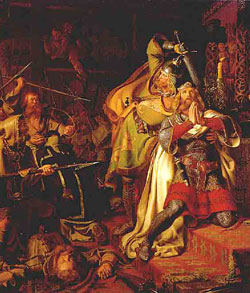 Martyred king of Denmark, sometimes called Knud. The illegitimate son of King Sven II Estridson of Denmark, Canute succeeded his brother Harald III Hen in 1081. After marrying Adela, the sister of Count Robert of Flanders, Canute built churches and monasteries. In 1085, he planned an invasion of England, but the nobles of the court rebelled against him and forced him to flee to the isle of Funen. There, Canute, his brother Benedict, and seventeen companions were slain in the church of St. Alban. Pope Paschal II authorized Canute's cult in 1101.