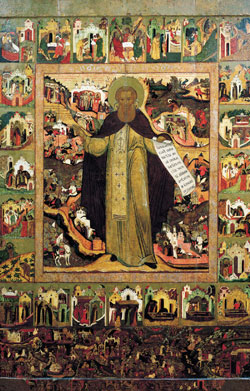 One of the foremost Russian saints and mystics. Born to a noble family near Rostov, he was christened Bartholomew. At the age of fifteen, he fled with his family to Radonezh, near Moscow, to escape a campaign against Rostov by the rulers of Moscow. As their wealth was all but wiped out, the family became peasant farmers until 1335 when, after the death of his parents, he and his brother Stephen became hermits at Makovka. Stephen left to become a monk, and Sergius received a tonsure from a local abbot. Increasingly well-known as a profoundly spiritual figure in the Russian wilderness, he attracted followers and eventually organized them into a community that became the famed Holy Trinity Monastery. He was ordained at Pereyaslav Zalesky. Serving as abbot, he thus restored the great monastic tradition which had been destroyed some time before during the Mongol invasions of Russia. Sergius was soon joined by Stephen, who opposed his stern cenobitical regulations and caused Sergius to leave the community and to become a hermit again. As his departure brought swift decline to the monastery, Sergius was asked to return by none other than Alexis, metropolitan of Moscow. As he was respected by virtually every segment of society, Sergius was consulted by Prince flirnitry Donskoi of Moscow encouraging the ruler to embark upon the campaign against the Mongols which culminated in the triumphant Battle of Kulikovo (1380), thus breaking the Mongol domination of Russia, Sergius sought to build upon this victory by promoting peace among the ever-feuding Russian princes and building monasteries; in all he founded around forty monastic communities. In 1378 he declined the office of Metropolitan, resigning his abbacy in 1392 and dying six months later on September 25, Canonized in 1449, he is venerated as the fore-most saint in Russian history.