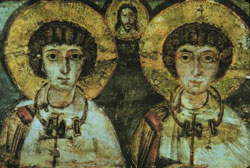 Roman martyrs. According to legend, they were officers in the legions of co-Emperor Maximian in Syria who refused to enter the temple of Jupiter or to make sacrifices to the gods. For their crimes, they were dressed in women’s clothing and led through the streets of Arabissus before being sent to die in Mesopotamia. Bacehus was flogged to death, and Sergius was scourged. and beheaded. Their cult was suppressed in 1969.