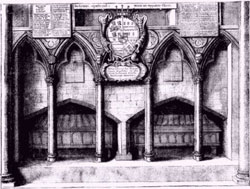 Also listed as Sebbe, he became the king of Essex (or the East Saxons) following the conversion of the kingdom by St. Cedd in 664. He ruled at a time when there was relative peace and the realm was under the domination of Mercia, a nearby kingdom. Sebbi abdicated after ruling thirty years and became a monk in London. He died there and was buried in the old St. Paul’s.