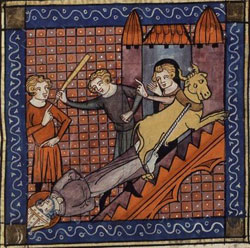 Martyrs of Rome. According to legend, Saturninus was a priest from Carthage who went to Rome and was arrested with a deacon, Sisinius, during the persecutions of Emperor Maximian. They were sentenced to hard labor and either died during their ordeal or were tortured and then beheaded. It is known with certainty that Saturninus lived, was martyred, and was buried on the Via Saleria, Rome, although details are not reliable.