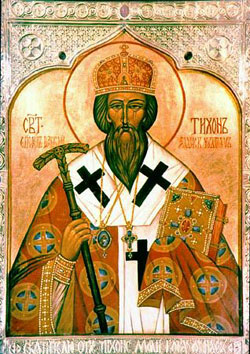 Russian monk and bishop. Born to a peasant family, he nevertheless received an excellent education and became a professor at Novgorod seminary. After spending a number of years as a monk (he entered the monastery in 1758), he served as bishop of Voronezh from 1763-1767, returning to the monastic life at the Zadonsk monastery from 1769. A deeply ascetical and mystical personality in the Eastern traditions, he was nevertheless much influenced by Western authors, including the Anglican bishop of Norwich Joseph Hall and the Lutheran theologian Johann Arndt. Tikhon was a prolific writer and was renowned both in active service and retirement for his abiding pastoral concerns and efforts on behalf of the poor and suffering.