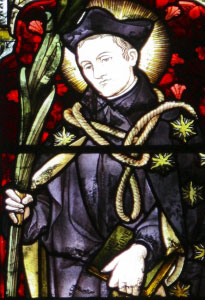 English martyr. Born at Dilworth, Lancashire, England, in 1549, he was raised as a Protestant and studied at Oxford University before undergoing a conversion to Catholicism. Leaving England to prepare for ordination at Douai and Rome, he was ordained and joined the Jesuits. going home in 1580. Arrested at his landing at Dover, he was taken to the Tower of London and eventually hanged, drawn, and quartered with three companions.