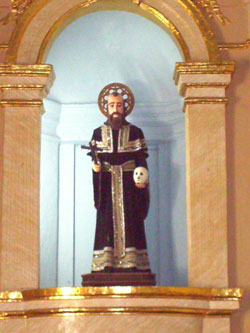 Hermit. A native of France, he led a dissolute early and maritial life but underwent a conversion through a pilgrimage to Rome, where he was forced to make a pilgrimage to the Holy Land (at the command of Pope Eugenius Ill, r. 1145-1153). Upon his return, he lived as a hermit and then became head of a monastery near Pisa. As he failed to bring about serious reforms among the monks there or on Monte Pruno (Bruno), he departed and once more took up the life of a hermit near Siena. Attracting a group of followers, the hermits received papal sanction. They later developed into the Hermits of St. William (the Gulielmites) until absorbed into the Augustinian Canons. In his later years, William was noted for his gifts of prophecy and miracles.