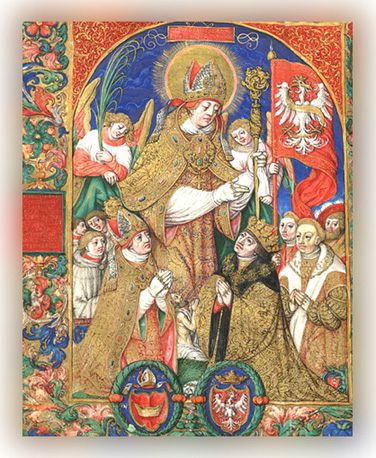 Stanislaus was born of noble parents on July 26th at Szczepanow near Cracow, Poland. He was educated at Gnesen and was ordained there. He was given a canonry by Bishop Lampert Zula of Cracow, who made him his preacher, and soon he became noted for his preaching. He became a much sought after spiritual adviser. He was successful in his reforming efforts, and in 1072 was named Bishop of Cracow. He incurred the enmity of King Boleslaus the Bold when he denounced the King's cruelties and injustices and especially his kidnapping of the beautiful wife of a nobleman. When Stanislaus excommunicated the King and stopped services at the Cathedral when Boleslaus entered, Boleslaus himself killed Stanislaus while the Bishop was saying Mass in a chapel outside the city on April 11. Stanislaus has long been the symbol of Polish nationhood. He was canonized by Pope Innocent IV in 1253 and is the principle patron of Cracow. His feast day is April 11th.