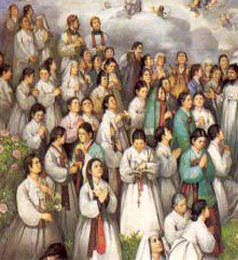 Martyr of Japan. A native of Korea, he was brought to Japan in 1591 as a prisoner of war and was subsequently converted to Christianity. Entering the Jesuits, he studied at the Jesuit seminary of Arima and worked for three decades as a catechist in both Japan and China. Seized during the persecution of the Church, he was burned alive at Nagasaki with Blessed Francis Pacheco. He was beatified in 1867.