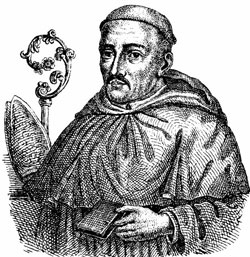 Cistercian bishop, also called Vincent of Cracow Born in Carnow, Poland, circa 1150, he studied in France and Italy before receiving appointment as provost of the cathedral of Sandomir (modern Poland). In 1208 he was appointed bishop of Cracow and worked to promote the refortns then being decreed by Pope Innocent III (r. 1198-1216) and to improve the monastic and religious conditions of the diocese. Resigning in 1128, he entered the Cistercians at Jedrzejow Abbey, where he established himself as one of Poland's first chroniclers through his authorship of the Chronicles of the Kings and Princes of Poland. His cult was confirmed in 1764, and he is venerated in Poland as a saint.

St. John of the Cross Sterling Silver Round Pendant