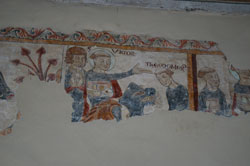 Bishop and missionary. Born at Artois, France, he studied at Arras under St.Vedast and considered the idea of becoming a priest so overwhelmmg that he ran away when his father expressed his opposition to his ordination. Subsequently ordained, he preached at Raviere and worked as a missionary until 513 when he was named bishop of Baycux. As bishop, he opposed paganism and founded a church on the site of a one-time pagan idol. He also founded a monastery nearby, later known as St. Vigeur le Grand.