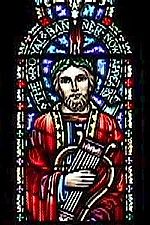 Gallic poet and (briefly) serving bishop of Poitiers, France. Known in full as Venantius Clementianus Fortunatus, he was born in Trevise, near Venice, Italy, and studied at Ravenna. He suffered from some ailment of the eye, but thanks to St. Martin of Tours, he was able to embark upon a pilgrimage in 565 which brought him to Mainz, Cologne, and Trier, Gennany, and to Metz and the Moselle, France. He reached the court of King Sigebert (r. sixth century) at Metz in 566 and there was much praise for his poetry, especially his eulogies. Venantius next journeyed to Verdun, Reims, Soissons, Paris, and finaIly Tours, where he prayed at the tomb of St. Martin. Moving on to Poitiers, he entered into the service of Queen Rodegunda who was now living as a nun, acting as her secretary until her death in August 587. Shortly before his death, he was named bishop of Potiers. A brilliant poet, considered a transitional figure in literature between the ancient and medieval periods, Venanhus was a prolific writer: six poems on the Cross, including the two famous works Vexilla Regia and Pange Lzngua Gloijosi; eleven books of poems; a metrical life of St. Martin of Tours; the prose lives of eleven Gallic saints, including the Vita Rodegundis; and the elegy DeExcidie Thui'ingiae.