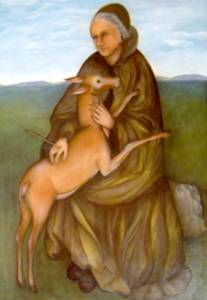 A native of Assisi, Italy, Giles was one of the earliest followers of St. Francis, from whom he received the habit in 1208. He accompanied Francis on many of his missions around Assisi, made a pilgrimage to Compostela, visited Rome and the Holy Land, and then made an unsuccessful visit to Tunis to convert the Saracens. The Christians in Tunis, fearful of the repercussions of his religious fervor, forced him back on a boat as soon as he landed. He spent the rest of his life living in Italy, living from about 1243 at the Monte Rapido hermitage on the outskirts of Perugia, where he died in 1263. He experiences ecstacies, had a vision of Christ at Cetona, and is considered the most perfect example of the primitive Franciscan. He is spoken of at length in "The Little Flowers of St. Francis" and Francis called him his "Knight of the round table." Known for his austerity and silence, his "The Golden Sayings of Brother Giles" is noted for its humor, deep understanding of human nature, and optimism.