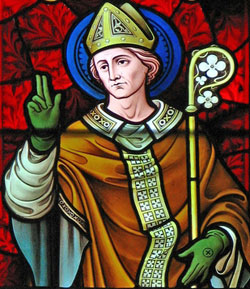 The "Apostle of Wessex." Birinus a German, became a priest in Rome and a bishop in Genoa, Italy, before undertaking a missionary apostolate, sent by Pope Honorius I. He went to Britain in 634, where he preached to the West Saxons. King Cynegils was converted by Birinus and gave him the area of Dorchester as his see. He died on December 3, and was buried in Dorchester, Oxfordshire.