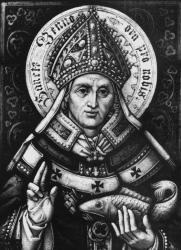 St. Benno, (1010-1106) bishop. Born in Hildesheim, Germany and educated in the abey of St. Michael, he bacame a canon at Gozlar in Hanover, chaplain to Emperor Henry III and in 1066 bishop of Meissen. He was imprisoned for a year for backing the nobility againsty Henry IV supported Pope Gregory VII was desposed by the bishops who sold out to the emperor shifted his allegiance to the antipope Guibert and appears to have been heavily enmeshed in contemporary pollitics. Sources however are untrustworthy. In his last years he was a missioner to the Wends. He was canonized in 1523. Feast day June 16.