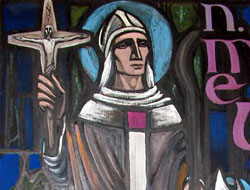 He is said to have been the son of Conis and Darerca, the sister of St. Patrick, whom he accompanied to Ireland and helped to evangelize in that country. According to the Life of St. Brigid, he is said to have had no fixed See, which might fit in his being a missionary. St. Patrick himself built the church at Ardagh and to this he appointed his nephew, Mel. Acting upon the apostolic precept, he supported himself by working with his hands, and what he gained beyond bare necessities, he gave to the poor. For sometime, he lived with his aunt Lupait, but slanderous tongues spread serious accusations against them, and St. Patrick himself came to investigate their conduct. Mel was plowing when he arrived, but he cleared himself of the charge by miraculously picking up a live fish from the ground as if from a net. Lupait established her innocence by carrying glowing coals without burning herself or her clothing. St. Patrick was satisfied, but he told his nephew in future, to do his fishing in the water and his plowing on the land, and he moreover, enjoined them to avoid scandal by separating, living and praying far apart. St. Mel's feast day is February 6.