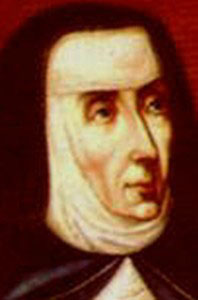 Blessed Victoria Strata, Religious (Feast day - October 15) Victoria was born at Genoa, Italy in 1562. At the age of seventeen she married Angelo Strata, with whom she had six children. When Angelo died in 1587, Victoria wanted to marry again because of the children. However, a vision of Our Lady convinced her to retire to a life of prayer, helping the poor and raising her children. After her maternal obligations were fulfilled, Victoria and ten other women took vows of religion in 1605, and this became the nucleus of the Blue Nuns. Victoria was elected Superior. A second convent was opened in 1612, and many houses were later established in France. Victoria died on December 15, 1617, and was beatified in 1828.