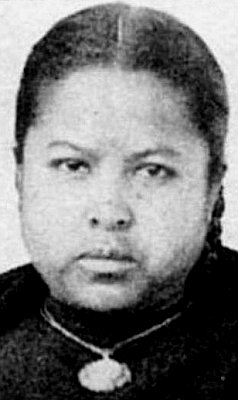 Blessed Victoria Rasoamanarivo was born in 1848 in the capital city of Antananarivo, Madagascar. Antananarivo, located in the center of the island, is capital of the kindgom of the Merina people. From 1828 to 1861, this area in Madagascar was ruled by Ranavalona I, the widow of Radama I, an astute and powerful queen not unlike Elizabeth I of England. Her powerful prime minister was Rainiharo, the grandfather of Blessed Victoria. Her brother also served a prime minister for almost 30 years.

At the age of 15, Victoria was baptized a Catholic and got married at age 17. She remained a Catholic even when under Protestant influence French Catholic missionaries were expelled. Victoria withstood the pressure to become a Protestant. From her position as a relative of the royal family, she became the protector of the Catholics. She managed to keep open the Catholic schools and the churches; she encouraged Catholics in the countryside through messengers; she appealed directly to the queen and the prime minister on their behalf. In 1886 the Catholic missionaries were allowed to return to a community of 21000 catholics that had survived because of Blessed Victoria. She spent six or seven hours daily in prayer and performed works of charity for the poor and abandoned, for prisoners, and for lepers. In 1894, she died at the age of 46.