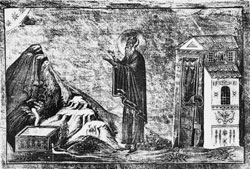 Hermit and apostle who faced the pagan priests of Edessa in Mesopotamia. Born in that city, Abraham refused to enter into a marriage arranged by his prosperous parents and went out into the nearby desert to live in a sealed cabin. Food was provided for him through a single opening by disciples, and his influence attracted other hermits to the region. When Abraham's parents died, he gave away his large inheritance. Soon after, he was asked by the bishop of Edessa to start a hermitage at Beth-Kiduna, near the city. The pagans in the region persecuted him after he destroyed their idols, but Abraham won them over and claimed the area for the Church. He then returned to his hermitage, where he is reported to have reached the age of seventy before dying.