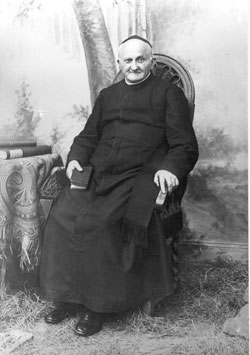 Founder of the Society of the Divine Word. Born in Goch, Germany, on November 5, 1837, Arnold studied at Gaesdonck, Munster, and Bonn. He was ordained in 1861 and served as a parish priest. He also served as a chaplain at an Ursuline convent at Kempen. In 1875, he founded the Society of the Divine Word in a mission house in Steyl, Holland. This society was designed to provide priests and lay brothers for the missions. The congregation was approved in 1901. Arnold also founded the Servant Sisters of the Holy Ghost for the missions in 1889. He died in Steyl on January 5, 1909, and was beatified in 1975 by Pope Paul VI. He was canonized on October 5, 2003 by Pope John Paul II