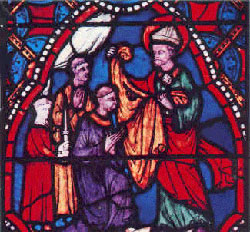 Bishop and classical scholar. Caius Sollius Apollinaris Sidonius was born in Lugdunum, about 423. He was from a noble family and received a brilliant education in the classical style. Entering the military, he married Papianilla, the daughter of Avitus, who became emperor of the West in 455. Living at the imperial court, Apollinaris survived the deposition of Avitus in 456 and subsequently served as the chief senator and prefect of Rome from 468 to 469. He then retired to Gaul, where he carried on a vast correspondence that gives considerable insight into the political period. In 469, although unwilling and not yet a priest, Apollinaris was named bishop of Avernum. He was chosen because of his piety and because he was considered the only one capable of defending the people against the invading Goths, under Alaric. Apollinaris assumed the humble lifestyle of the bishopric and learned so much about ecclesiastical affairs that he was soon recognized as an authority. He opposed King Euric of the Goths in 474 and was exiled briefly. He was an outstanding orator and poet, and he introduced the days of public prayer called "Rogation Days." Twenty-four of his letters and poems survived and are a valuable resource on the period. Apollinaris is considered to be the last representative of the great classical culture of Rome which was being overrun by the Germanic invasions.