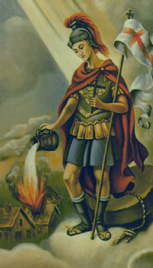 The St. Florian commemorated in the Roman Martyrology on May 4th, was an officer of the Roman army, who occupied a high administrative post in Noricum, now part of Austria, and who suffered death for the Faith in the days of Diocletian. His legendary "Acts" state that he gave himself up at Lorch to the soldiers of Aquilinus, the governor, when they were rounding up the Christians, and after making a bold confession, he was twice scourged, half-flayed alive, set on fire, and finally thrown into the river Enns with a stone around his neck. His body, recovered and buried by a pious woman, was eventually removed to the Augustinian Abbey of St. Florian, near Linz. It is said to have been at a later date translated to Rome, and Pope Lucius III, in 1138, gave some of the saint's relics to King Casimir of Poland and to the Bishop of Cracow. Since that time, St. Florian has been regarded as a patron of Poland as well as of Linz, Upper Austria and of firemen. There has been popular devotion to St. Florian in many parts of central Europe, and the tradition as to his martyrdom, not far from the spot where the Enns flows into the Danube, is ancient and reliable. Many miracles of healing are attributed to his intercession and he is invoked as a powerful protector in danger from fire or water. His feast day is May 4th.