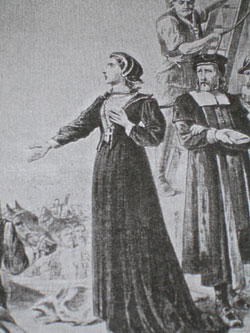 English martyr from Dunmow, Essex. The daughter of William Heigham, she was disowned by him when she married a Catholic, Roger Line. Roger was imprisoned for being a Catholic and was exiled and died in 1594 in Flanders, Belgium. Anne stayed in England where she hid Catholic priests in a London safe house. In this endeavor she aided Jesuit Father John Gerard until her arrest. Anne was hanged in Tyburn on February 27, 1601. Pope Paul VI canonized Anne Line in 1970 as one of the Forty Martyrs of England and Wales.