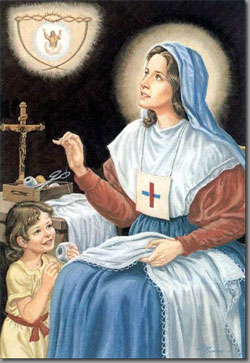 Feast day: June 09: Anne Mary Taigi (1769 - 1837) Born at Siena, daughter of a druggist named Giannetti, whose business failed, she was brought to Rome and worked for a time as a domestic servant. In 1790 she married Dominic Taigi, a butler of the Chigi family in Rome, and lived the normal life of a married woman of the working class. In the discharge of these humble duties and in the bringing up of her seven children she attained a high degree of holiness. Endowed with the gift of prophecy, she read thoughts and described distant events. Her home became the rendezvous of cardinals and other dignitaries who sought her counsel. She was beatified in 1920.