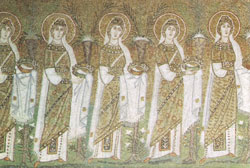 Martyr with her sister, Victoria, in Thora, on Lake Velino in Italy. Anatolia lived with Victoria and was sought by a young man named Aurelius but refused him. She was supported in her decision by a visit from an angel. Her refusal brought about the arrest of the sisters during the persecutions conducted by Emperor Trajanus Decius. Banished to Thora, Anatolia was locked in a room with a venomous serpent, but the reptile did not attack her. Her guard, a man named Audax, was so moved by the event that he became a Christian and suffered Anatolia's martyrdom by the sword. The martyrdom has been recorded in two legends or traditions.