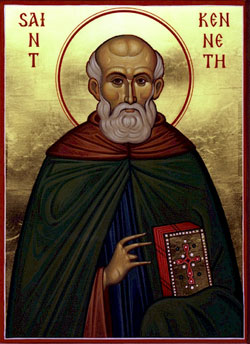 Kenneth is a derivative of Canice. All we know about Canice is from unreliable legend, according to which he was born at Glengiven, Ireland. He became a monk under St. Cadoc at Llancarfan, Wales, and was ordained there. After a trip to Rome, he studied under St. Finnian at Clonard, Ireland, accompanied Ss. Kieran, Columba, and Comgall to St. Mobhi at Glasnevin. He preached for a time in Ireland, and then went to Scotland. A close friend of Columba's whom he accompanied on a visit to King Brude of the Picts, he was a most successful missionary. He built a monastery at Aghaboe, Ireland, and probably one at Kilkenny. He is also known as Kenneth and Cainnech. His feast day is October 11th.