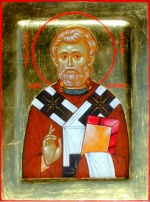 Abbot and soldier; born in Laudun, Poitou, France, also called Adelelmus and Lesmes. Aleaunie chose a military career, going on duty before making a pilgrimage to Rome. During this journey he met St. Robert and was converted to the religious life, becoming a Benedictine. Queen Constance of Castile, impressed with his holiness, invited Aleaunie to Burgos, Spain. There King Alfonso IV built him a monastery. Aleaunie became abbot of the new foundation, but when the Moors fought against the king, Aleaunie used his prior skills and joined in the war. After his death, Aleaunie, called Lesmes in Spain, became a patron of the city of Burgos.