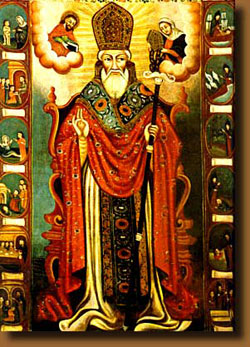 Gregory the Enlightener was also surnamed the Illuminator. He is of unknown origins, but unreliable tradition has him the son of Anak, a Parthian who murdered King Khosrov I of Armenia when Gregory was a baby. The infant Gregory was smuggled to Caesarea to escape the dying Khosrov's order to murder the entire family, was baptized, married, and had two sons. When King Khosrov's son, Tiridates, regained his father's throne, Gregory was permitted to return, but he incurred the King's displeasure by his support of the Armenian Christians and his conversion activities. In time, Tiridates was converted to Christianity by Gregory and proclaimed Christianity the official religion of Armenia. Gregory was consecrated bishop of Ashtishat, set about organizing the Church in Armenia and building a native clergy, and worked untiringly to evangelize the Armenians. Curiously enough, he set into motion the process that was to make his See a hereditary episcopate when he consecrated his son Aristakes to succeed him. He then retired to a hermitage on Mount Manyea in Taron and remained there until his death. Many extravagant legends and miracles were attributed to him, many of which are celebrated as feasts by the Armenians. He is considered the apostle of Armenia. His feast day is September 30th.