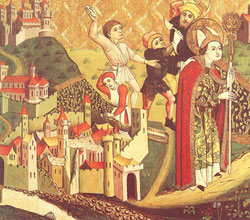 A missionary in Ireland whose tomb became a center for pilgrims. Adalbert was born in Northumbria, England, and was educated at Rathmelgisi Monastery. Accompanying St. Willibrord and others to Friesland, he gained many converts in an area called Egmont. Adalbert was also a companion of St. Egbert to Ireland. It is believed that he became St. Willibrord's successor as the abbot of Epternach. Adalbert's shrine was noted for miracles after his death.