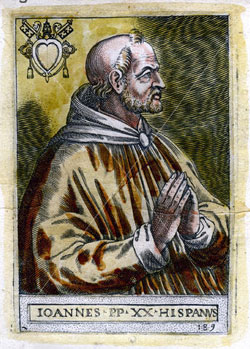 Pedro Juliano, or Peter of Spain, was born in Lisbon c. 1210/20. The son of a physician, he studied at the University of Paris and taught medicine at the University of Siena. He became cardinal bishop of Tusculum in 1273 and attended the Second Council of Lyons the following year. He was elected pope in 1276. He hoped to re-establish unity with the Eastern church but was in his nine-month papacy more concerned with fighting the influence of Averroism at the University of Paris and with an attempt to launch a crusade. Peter is the author of Summulae logicales, a treatise on logic, and The Poor Man's Treasury, a book of cures. He wrote a medical treatise on the eye, a book on the soul, and a commentary on The Celestial Hierarchy of Dionysios.