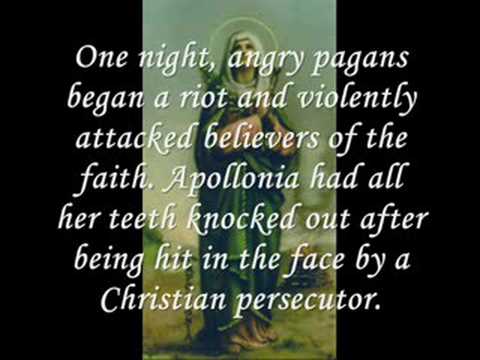 St. Apollonia, who died in the year 249, was martyred for not renouncing her faith during the reign of Emperor Philip. The account of the life of St. Apollonia was written by St. Dionysius to Fabian, Bishop of Antioch. Apollonia had all her teeth knocked out after being hit in the face by a Christian persecutor under the reign of Emperor Philip. After she was threatened with fire unless she renounced her faith, Apollonia jumped into the flames voluntarily. She is considered the patron of dental diseases and is often invoked by those with toothaches. Ancient art depicts her with a golden tooth at the end of her necklace. Also in art, she is seen with pincers holding a tooth.