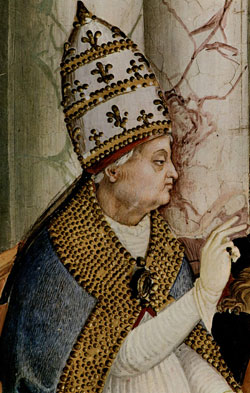 Born in 1405 at Corsinano (later renamed Pienza in his honor), Enea Silvio Piccolomini took his papal name from the epithet Pius Ćneas. In 1431, he attended a council at Basel and became the secretary to Amadeus of Savoy, who later became Antipope Felix V. Frederick III named Piccolomini poet laureate in 1442; among his works are The Tale of Two Lovers and Chrysis. He was reconsiled to Eugene IV three years later and was ordained in 1446. Elected pope two years after his ordination, Pius called for a crusade to retake Constantinople from the Turks. No one responded, so the pope decided in 1463 to lead the crusade himself. He died the following year in Ancona; his heart was buried there, and his body was taken to Rome for burial.