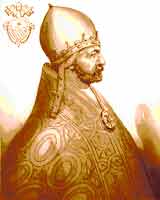 Elected to the papacy in 1277 as Nicholas III, Giovanni Gćtano was born in Rome c. 1210 or c. 1220. Innocent IV had appointed him a cardinal, and Urban IV made him cardinal protector of the Franciscans. As pope, he settled a dispute about poverty among the Franciscans. In addition to enlarging the Papal States, Nicholas reformed the chancery. He was the first pope to live in the Vatican palace. He died in 1280.