Rethinking the 'March for Life;' how is it relevant today?

It was an event that was not supposed to have anniversaries. 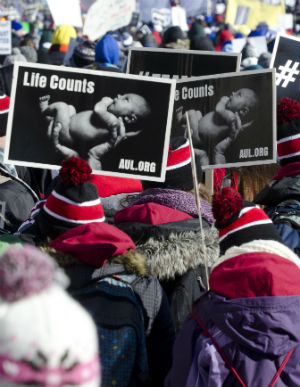 As a political march that has yet to overturn Roe v. Wade continues to tick off anniversary after anniversary, many people are left wondering - is the March even relevant anymore?

Washington D.C. (CAN) - When the March for Life started 43 years ago, abortion on demand up to the point of birth had just been legalized by the United States Supreme Court in Roe vs. Wade. At that point, pro-life issues were not nearly as politically entrenched as they are today - in fact, many legislators on both sides of the aisle thought the decision was ill conceived and would surely be changed.

"People were just in shock, they were short of shell-shocked the year after Roe vs. Wade," Jeanne Mancini, president of the March for Life Education and Defense Fund, told CNA. 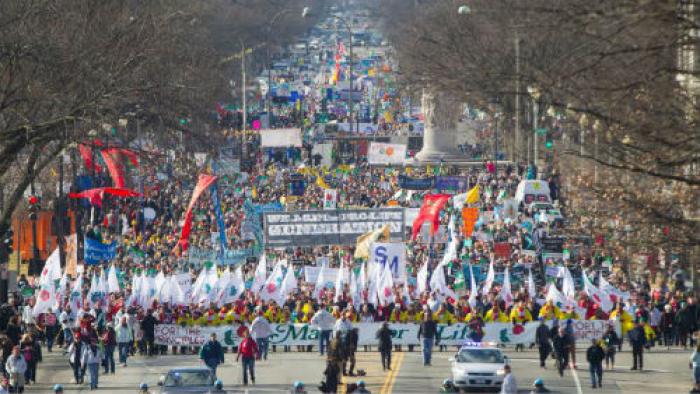 "People were thinking that this thing was going to get corrected...they were such poorly conceived Supreme Court decisions, and really outside of the parameters of what the Supreme Court would normally do," she added.

However, it has been 43 years since the March for Life began, and the event has become an almost go-to staple in the world of youth ministry trips and church events for pro-life denominations. As a political march that has yet to overturn Roe v. Wade continues to tick off anniversary after anniversary, many people are left wondering - is the March even relevant anymore?

"It's been 43 years, that's so long for this injustice to continue," she told CNA.

At the same time, Quigley said, that abortion on demand remains legal is all the more reason to keep fighting.

"We have got to be there as pro-life Americans speaking up and speaking out for the unborn children and moms that are at risk and have suffered and have died because of abortion," she said.

Yet, there is much to be hopeful about in the pro-life movement. This last summer saw a decline in the number of abortions nationwide in the United States, though the specific reasons as to why remain unclear. A growing number of Americans do not support abortion on demand, though they do support it under certain circumstances.

For Mancini, the March is always an energizing moment as well as a powerful message for politicians about the pro-life cause: it is a movement that is robust, powerful, and full of young people.

"It becomes a paradigm of what the entire movement is about, but if you didn't see that in one collective place, people wouldn't believe it's true."

Not always a right-wing cause

At the time of the March for Life's inception, pro-life attitudes were a bit more closely aligned with the Democratic Party, and it would not become a deeply divisive partisan issue for several more years. Some of the earliest featured speakers at the March for Life even included several now-prominent pro-choice advocates - Joe Biden, Jesse Jackson, and Harry Reid, to name a few, Mancini said.

"The first year the March happened, it was very small, and there were a lot of legislators," she said. "Now, it's much more cultural."

The movement grew because it had to.

Through the '70s and '80s, the national March remained a relatively small movement of politically minded activists. During the Reagan presidency, pro-life issues shifted from slightly left to more definitely right.

However, it wasn't until the mid-1990s that the March became a much more youthful, grassroots and cultural event.

"Nellie Gray (the founder of the March for Life) was working very closely with churches and bishops, it was really grassroots and very Catholic, so more and more schools started bussing young people in for the march for life," Mancini said.

Now, the March for Life has a reputation for being a youthful event - hordes of college and high school students descend on Washington D.C. during the days leading up to the event, bringing lively chants and songs and colorful posters with them as they make their way to the capitol, often in freezing winter weather.

Aimee Murphy is one of those young people that started attending pro-life events at the age of 17. At the time, she was a pro-life atheist, and often felt like the odd one out in her high school - but meeting other young people at bigger events like the March for Life made her realize that she wasn't alone.

"It was so important for me as a young person to see...that I was not the only high school student who cared about the pre-born," she told CNA.

Now a millennial activist and the Executive Director of the "Life Matters Journal," Murphy said it's easy, and maybe even fair, to criticize the March for Life as an expensive, superfluous event - if it remains just that.

"If you don't go home and do something the March for Life is useless," she said.

"As pro-life activists who struggle against a culture and a media and a legislature who isn't willing to do anything that would actually make a difference in terms of abortion, you face this idea that the evil is too big, there's nothing that I personally can do, and you'll sit around and feel bad for yourself," Murphy said.

"But the March for Life, inasmuch as it gives people hope and encourages them to do something and change what is going on, then it's absolutely priceless."

That sense of community and solidarity, particularly with other like-minded young people, is crucial to keeping high school and college students engaged in the pro-life movement after they graduate said Kristan Hawkins, president of Students for Life of America.

Last year alone, there were around 200,000 people in attendance at the national March - many of them students and young adults.

"We tell everyone to at least come once, because it's a formative event," she said. "The key to making them life-long activists is getting people to understand that this is a group that they want to be a part of, and this is a group that's winning, and the March for Life does that."

Hawkins echoed Murphy in that while the March is an important event, what happens afterwards is of equal importance.

"That means envisioning a country without abortion and figuring out OK, if abortion was made illegal tomorrow, what would we need? What do we need to do? And that's eliminating the need for abortion, eliminating the belief that that girl has to kill her child."

Besides serving as a rallying point for the pro-life movement, the March for Life also continues to send a political message to legislators on Capitol Hill as well as to the national media in Washington, D.C.

"It really proves to the rest of the country that this is not the minority, we are the majority, we're not going away, and it entices others to join our movement," she added.

Passing legislation that would allow for some common sense restrictions on abortions - such as banning abortion after five months, when a child is capable of feeling pain in the womb - is an area where the pro-life movement is hoping to see some progress in the next year, Quigley said.

"Public opinion is continuing to catch up with science. People understand that the unborn child is alive, that it is a human being," she said.

"Even when there is codified law, the executive branch pushes it so much or just re-writes things to be what they want, it's daunting, and it's continual," she said.

"So it would be so fantastic to have an administration that was pro-life so we're not always working on the defensive end."

The March for Life is also a common reference point for politicians when talking about the strength and the youthful energy of the pro-life movement, Mancini said, so it's important that they continue to see that year after year.

"I have yet to hear a member of Congress speak about the issues and not allude to the MFL, because it's such a success and such a victory to point to all those people coming together for a common reason and a common human rights issue," she said.

This year's national March for Life will take place on Friday, January 22. Tens of thousands of people are expected to attend, even as a possible blizzard threatens the area.

For Quigley and thousands like her, the March still matters, rain or shine.

"It's so important that everyone here in Washington understands that America is a pro-life nation."