Monastery of the Transfiguration of Christ highest, largest of six monasteries of Meteora

The Great Meteoron or the Monastery of the Transfiguration of Christ is the highest, largest and oldest of the six monasteries of the Meteora. If one only has time to visit one monastery in the Meteora area, this monastery is the one to choose. 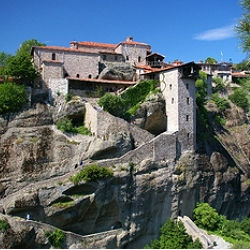 Founded in the 14th century by St. Athanasios Meteorites, who was a scholarly monk from Mount Athos. The monk ascended the highest pinnacle, which legend says he was carried alight by a giant eagle - and named it the site Megalo Meteoro.

LOS ANGELES, CA (Catholic Online) - Founded in the 14th century by St. Athanasios Meteorites, who was a scholarly monk from Mount Athos. The monk ascended the highest pinnacle, which legend says he was carried alight by a giant eagle - and named it the site Megalo Meteoro, or "Great Place Suspended in the Air." He originally built a small church and modest lodgings for monks, dedicating both to the Virgin Mary.

St. Athanasios Meteorites later added a larger church dedicated to the Transfiguration of Christ, which became the primary dedication of the monastery.

Athanasios" was succeeded by Saint Iosaph, a Serbian king formerly known as John Uros who abandoned worldly power to become a monk here around 1373.

Over the course of his 40-year life at Great Meteoron, Iosaph rebuilt the Church of the Transfiguration and added a monastic building including monks' cells, a hospital and a cistern. The Patriarch of Constantinople granted the monastery independence around 1415 and its leader was officially designated an abbot in 1482.

The Great Meteoron reached its peak in the 16th century, when it received significant imperial and royal donations. The nave and narthex of the Church of the Transfiguration were rebuilt in 1544-45 and the monastic complex was expanded later on in that century. A new kitchen, a tower, a home for the aged, a refectory and several chapels were added at this time. The church was repaired and enlarged after an earthquake in 1544.

Platýs Líthos, or "Broad Rock," the rock on which the Great Meteoron stands, rises over 2,000 feet above sea level. The original hermitage of St. Athanasios Meteorites, it is a simple building carved into the rock, and can only be seen on the left of the staircase leading to the monastery entrance. A shady courtyard within the monastery provides a pleasant place to rest after the ascent.

The Church of the Transfiguration consists of the katholikon built by Saint Ioasaph's in 1388 and a nave and narthex added in 1544-45. The katholikon has a Greek-cross-in-square floor plan, with a 12-sided central dome resting on a drum.

The frescoes of the katholikon date from 1497-98 and are very well-preserved. Painted in the Macedonian style the frescos depict Christ Pantocrator, the Virgin Enthroned, the Three Hierarchs, various military saints, the monastery's founders Athanasios and Iosaph, and scenes from the life of Christ.

The large refectory (1557) on the north side of the church has a vaulted roof supported on five pillars and an apse decorated with a portrait of the Virgin Mary with the archangels Michael and Gabriel. It houses an excellent museum with wood-carved crosses, rare icons and important religious manuscripts. The impressive home for the aged (1572) has a central dome.