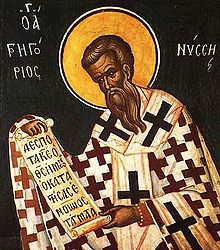 Gregory of Nyssa St. Gregory of Nyssa (c. 330-c. 395) was a younger sibling in a family that gave the church many years of service and at least five saints. Before entering the monastery of his brother, Basil the Great, Gregory was a rhetorician. He may have been married, although some scholars believe that his treatise On Virginity argues against that. He became bishop of Nyssa c 371 or 372. Arians accused him of mismanagement and deposed him in 376. On the death of the Arian, Valens, two years later, he was restored to his see. He attended the first Council of Constantinople in 381, after which he traveled in Transjordan (Arabia) to settle disputes in the churches. During a trip to Jerusalem, he was forced to defend his Christology, although he was then and is now well-known for his Trinitarian theology. In 394, he attended a synod in Constantinople and is thought to have died shortly after that when mention of him in church records ceases. His best-known works are the Catechetical Oration, The Life of Moses, and the Life of St. Macrina (his sister).