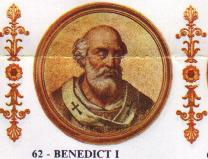 Benedict I Little is known about the life of Benedict I. He was born in Rome and was elected pope in 574. Emperor Justin did not confirm the election until the following year, at which time Benedict was officially enthroned. In 578, the pope ordained Gregory the Great to the diaconate, and over the course a four-year papacy, Benedict consecrated 21 bishops. When the Lombards invaded Rome in 579, the pope appealed to the emperor for aid. Troops and grain arrived, but the quantity was insufficient. Benedict died during the Lombard seige.

Continue reading about Benedict I