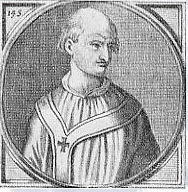 Benedict VIII Count Theophylact of Tusculum (c. 980-1024) was a layman when elected pope in 1012. Two years later, he crowned Henry II Holy Roman Emperor and convened a synod to condemn simony. Benedict, at the emperor's request, ordered that the controversial filioque be sung as a part of the creed during the mass. The pope took part in a naval battle against the Arabs in 1016 and helped to restore papal power in the Campagna and Tuscany. A synod at Pavia in 1022 forbade clerical marriage and concubinage; it also condemned the children of such unions to serfdom.