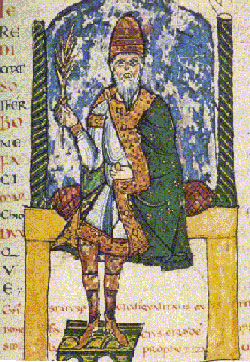 Boniface III Pope Boniface III, a Roman by birth and a Greek by descent, was a deacon and papal nuncio before he was elected to the papacy in February, 607. His service at the court in Constantinople so impressed Emperor Phocas that the emperor decreed the bishop of Rome was the head of the church. During his nine months as pope, Boniface convened a council that forbade any discussion of papal succession until the reigning pope had been dead for three days.