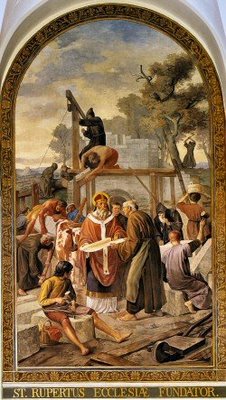 Possibly descended from the Merovingians and claimed by the Irish as one of their own, St. Rupert of Salzburg was bishop of Worms when Childeric III asked that he evangelize Bavaria. Rupert travelled from Ratisbon to the Danube, where he converted Duke Theodo II. The duke gave him land at Iuvavum, on which Rupert established the abbey of St. Peter and the Nonnberg convent. Its abbess was his niece, Erendruda. Rupert also converted pagan temples into Christian churches and established the salt-mining industry from which the city takes its present name, Salzburg. When Rupert died c. 710/717, he was buried in St. Peter's abbey. Vergil of Salzberg later translated his relics to the cathedral in Salzberg.