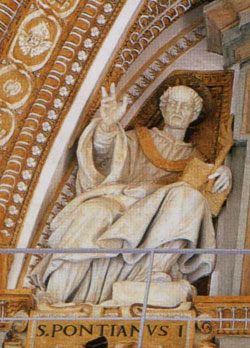 Pontian, Roman by birth, was elected to the papacy in 230 and was pope at the time that a synod condemned Origen as a priest and as a teacher. Five years after his consecration, Pontian was arrested and exiled to Sardina, with Hippolytus, the antipope. The two were reconsiled in the mines. Pontian died that year. Pope Fabian (236-250) translated the relics of the pope and the antipope to Rome. The two now share the same feast day, 13 August.