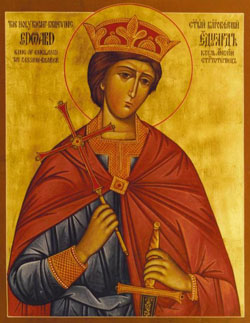 Edward was the eldest son of King Edgar of England and his first wife, Ethelfleda who died shortly after her son's birth. He was baptized by St. Dunstan and became King in 975 on his father's death with the support of Dunstan but against the wishes of his stepmother, Queen Elfrida, who wished the throne for her son Ethelred. Edward ruled only three years when he was murdered on March 18 while hunting near Corfe Dastle, reportedly by adherents of Ethelred, though William of Malmesbury, the English historian of the twelfth century, said Elfrida was the actual murderer. In the end, Elfrida was seized with remorse for her crime and, retiring from the world, she built the monasteries of Amesbury and Wherwell, in the latter of which she died. Edward was a martyr only in the broad sense of one who suffers an unjust death, but his cultus was considerable, encouraged by the miracles reported from his tomb at Shaftesbury; His feast day is March 18 and still observed in the diocese of Plymouth.