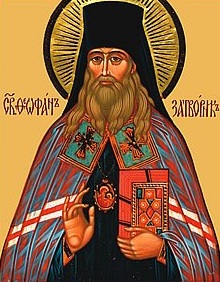 St. Theophanes Abbot and Confessor MARCH 12 A.D. 818     His father, who was governor of the isles of the Archipelago, died when he was only three years old, and left him heir to a very great estate, under the guardianship of the Iconoclast emperor, Constantine Copronymus. Amidst the dangers of such an education, a faithful pious servant instilled into his tender mind the most generous sentiments of virtue and religion. Being arrived at man's estate, he was compelled by his friends to take a wife; but on the day of his marriage, he spoke in so moving a manner to his consort on the shortness and uncertainty of this life, that they made a mutual vow of perpetual chastity. She afterwards became a nun, and he for his part built two monasteries in Mysia one of which, called Megal-Agre, near the Propontis, he governed himself. He lived, as it were, dead to the world and the flesh, in the greatest purity of life, and in the exercises of continual mortification and prayer. In 787, he assisted at the second council of Nice, where all admired to see one, whom they had formerly known in so much worldly grandeur, now so meanly clad, so modest, and so full of self-contempt as he appeared to be. He never laid aside his hair shirt; his bed was a mat, and his pillow a stone; his sustenance was hard coarse bread and water. At fifty years of age, he began to be grievously afflicted with the stone and nephritic colic; but bore with cheerfulness the most excruciating pains of his distemper. The emperor Leo, the Armenian, in 814, renewed the persecution against the church, and abolished the use of holy images, which had been restored under Constantine and Irene. Knowing the great reputation and authority of Theophanes, he endeavored to gain him by civilities and crafty letters. The saint discovered the hook concealed under his alluring baits, which did not, however, hinder him from obeying the emperor's summons to Constantinople, though at that time under a violent: fit of the stone; which distemper, for the remaining part of his life, allowed him very short intervals of ease. The emperor sent him this message. "From your mild and obliging disposition, I flatter myself you are come to confirm my sentiments on the point in question with your suffrage, it your readiest way for obtaining my favor, and with that the greatest riches and honors for yourself, your monastery, and relations, which it is in the power of an emperor to bestow. But if you refuse to comply with my desires in this affair, you will incur my highest displeasure, and draw misery and disgrace on yourself and friends." The holy man returned for answer: "Being now far advanced in years, and much broken with pains and infirmities, I have neither relish nor inclination for any of these things which I despised for Christ's sake in my youth, when I was in a condition to enjoy the world. As to my monastery and my friends, I recommend them to God. If you think to frighten me into a compliance by your threats, as a child is awed by the rod, you only lose your labor. For though unable to walk, and subject to many other corporeal infirmities, I trust in Christ that he will enable me to undergo, in defense of his cause, the sharpest tortures you can inflict on my weak body." The emperor employed several persons to endeavor to overcome his resolution, but in vain: so seeing himself vanquished by his constancy, he confined him two years in a close stinking dungeon, where he suffered much from his distemper and want of necessaries. He was also cruelly scourged. having received three hundred stripes. In 818, he was removed out of his dungeon, and banished into the isle of Samothracia, where he died in seventeen days after his arrival, on the 12th of March. His relics were honored by many miraculous cures. He has left us his Chronographia, or short history from the year 824, the first of Dioclesian, where George Syncellus left off, to the year 813. His imprisonment did not allow him leisure to polish the style.