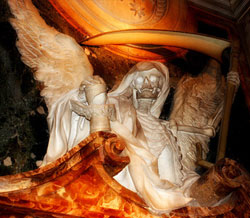 To please the enemies of the Christians, Herod Agrippa had put St. James to death, and now he planned to do the same to St. Peter, the Head of the Church. Once he had him in prison, he set a heavy guard about him to make sure he would not escape. But all the Christians of Jerusalem were begging the Lord to save St. Peter, and their prayers were answered.  The night before he was to be condemned, St. Peter was peacefully sleeping in his prison cell between his two guards bound tightly by two chains. He was unafraid of death and ready to do God's will. Suddenly an angel appeared and tapped him on the side to awaken him. He told him to get up at once, put on his cloak and sandles and follow him. At the same moment, both the chains fell from his hands! Out the two went, past two sets of guards, to the gate. This iron gate opened to them by itself and the angel led St. Peter out to the street. Then he disappeared. Up to then, Peter had thought he might be dreaming, but now he new that God had really sent an angel to free him! What joy and gratitude filled his heart! At once, the Apostle went to the home of Mary, St. Mark's mother, where many Christians were praying for his safety. He knocked at the door and a young woman named Rhoda came to ask who it was, without opening the door. When she heard St. Peter's voice, she ran joyfully to tell the others. They, however, could not believe the news. "It must be his angel," they said when she kept insisting. Meanwhile St. Peter knocked again. At last they let him in, and their happiness was immense when they saw it was truly St. Peter himself! He told them how the angel had freed him, and altogether they blessed and thanked the Lord. The feast day is August 1st.