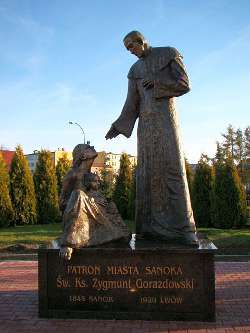 Zygmunt Gorazdowski was born on 1 November 1845 in Sanok, Ukraine. His family lived their Catholic faith most seriously, and Zygmunt grew up in this deeply religious environment that was not exempt from trials and suffering.

As a child, Zygmunt was afflicted with a lung ailment; this, however, did not prevent him from considering the needs of others and offering his help where he could.

After finishing high school in Przemysl he enrolled in the faculty of law in Lviv. At the end of his second year of law studies he decided to enter the Latin Catholic Seminary in Lviv, feeling called to the priesthood.

All done for the service of the poor

He finished his studies there and, considering his poor health, underwent two years of intensive therapy. On 21 July 1871, he was ordained a priest.

For the first six years, Fr Gorazdowski served as parish vicar and administrator at Tartakow, Wojnilow, Bukaczowce, Grod Jagelonski and Zydaczow. He gave of himself totally in carrying out his priestly duties and in works of charity.

During an outbreak of cholera in Wojnilow, Fr Zygmunt heroically did all he could to help the sick and dying, even laying out the bodies of the dead despite the great risk of contagion.

Throughout his priesthood he took great care to protect the spiritual health and growth of his parishioners, for whom he wrote and published a catechism and many other books to help parents, teachers and youth. He also began many apostolic works for the poor and suffering.

Beginning in 1877, Fr Zygmunt started a wonderful spiritual and charitable project in the Parish of St Nicholas in Lviv. He worked for 40 years there, serving in many schools and also founding the "Bonus Pastor" Association for priests.

Founder of the Sisters of St Joseph

Above all else, his charity sparkled, especially for the needy and suffering. He founded a home and soup kitchen for the needy, a health-care centre for the terminally ill and for convalescents, an institute for poor seminarians, a home for single mothers and orphans, and "St Joseph's Polish-German Catholic School".

In order to maintain and continue these works, he founded the Religious "Congregation of the Sisters of St Joseph" on 17 February 1884.

Fr Zygmunt Gorazdowski died in Lviv on 1 January 1920. Those who knew him called him the "Father of the poor and priest of the homeless".

The Sisters of St Joseph continue in the charism entrusted to them by their Founder. They currently work in eight countries with the poor, sick and suffering, and serve in the field of education.