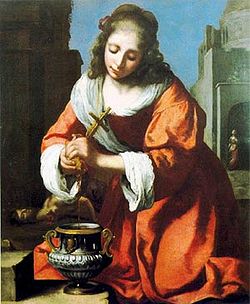 Praxedes according to her legend was a Roman maiden, the sister of St. Pudentiana, who, when the Emperor Marcus Antoninus was hunting down Christians, sought them out to relieve them with money, care, comfort and every charitable aid. Some she hid in her house, others she encouraged to keep firm in the faith, and of yet others she buried the bodies; and she allowed those who were in prison or toiling in slavery to lack nothing. At last, being unable any longer to bear the cruelties inflicted on Christians, she prayed to God that, if it were expedient for her to die, she might be released from beholding such sufferings. And so on July 21 she was called to the reward of her goodness in Heaven. Her body was laid by the priest Pastor in the tomb of her father, Pudens, and her siser Pudentiana, which was in the cemetery of Priscilla on the Salarian Way. This saint was certainly buried in the catacomb of Priscilla, near to St. Pudentiana. But that she was the sister of that saint, or that either of them was the daughter (as later legends say) of a Roman senator, Pudens, converted by St. Peter, there is no reason to believe. She was at first venerated as a martyr in connection with the ECCLESIA PUDENTIANA, but afterwards a separate church was built in her honour, on the alleged site of her house, to which, when it was rebuilt by Pope St. Paschal I (the present Santa Prassede), her relics were taken.